Building muscle and getting in shape is not as hard as you think! The process is quite simple and can be divided into two parts: things you do inside the gym, and things you do outside the gym. In this article, we tackle the first category. More specifically, we discuss everything you need to know about constructing and implementing one of my favorite workout routines—the 3-day split.

What is the best workout routine for me?

If you want to build muscle, you need a solid plan. Without one, you’ll feel lost and unmotivated.

The first question you need to ask is “how much time can I invest in the gym?” The answer will dictate the structure of half your plan.

If you need help, check out this article. For most beginners (and even seasoned athletes), I suggest training for 45–90 mins, three times a week. Anything less is insufficient, and anything more (such as 5 days a week, or 6 days a week) usually results in over-training, unless you know what you’re doing.

If you prefer to train with this frequency, you should follow a split-training protocol.

What is split training?

Split training is a weightlifting protocol that dates back to the golden era of bodybuilding. It is a common training methodology that involves breaking up your workouts by body part or muscle group. This is in contrast to full-body workouts, which involve training the entire body once, twice, or even three times a week.

Here is the basic idea: muscles are split into groups, and each group is trained on a different day. For instance, some prefer to split their workouts into two groups—”upper body” and “lower body”—and train each group once a week. This would be a 2-day upper-lower split.

What are the common variations of the 3-day split?

Here are four routines that fall under the 3 day/week training frequency, as well as the 3-day full-body workout.

What is the Push Pull Legs 3-day split?

Pull Day: A day to train the muscles that activate when performing a pulling motion. This includes all the muscles in your back, your biceps, and your rear delts.

Push Day: A day to train the muscles used in pushing: chest, triceps, and shoulders.

Leg Day: A day to train all the leg muscles.

To understand the logic behind PPL, try to come up with the most general way of splitting the your muscles into two groups.

What do you think?

If you came up with upper body/lower body, you are correct! Now, try to come up with the next less generalized way of splitting the body. In other words, how can we subdivide “upper body” or “lower body” so that we have three general groups?

Let’s leave lower body alone and look at the upper body. The most straightforward way to divide upper body is into groups of muscles that are used in pulling and pushing.

With 3-day PPL, you train the muscles used in pushing and pulling, and your legs muscles, on three different days.

Cool? The next logical question is, on which days do we train each group and in what order?

Let’s first tackle order. Because the muscles used in pushing and pulling are much more interconnected than with the muscles of the legs, the best order is Push-Legs-Pull (or the reverse).

You don’t want to train all three groups on three consecutive days as that would lead to 4 consecutive rest days. Instead, you should follow this schedule:

The exact days of the week are arbitrary, but it would be a good idea to make day 1 Monday so that you can rest over the weekend.

You also don’t want “push” and “pull” days to fall too close to each other because, as already mentioned, the muscles used in pushing and pulling are very interconnected. Did you know that the pull-up (a predominantly “pull” movement) activates both your chest and shoulders (the major “push” muscles) to a considerable degree? It might not seem so, but it’s true! You might have observed this fact during your early days of working out or after taking a long break from the gym. If I’m not lifting consistently, my chest is always sore the day after a back day.

These guidelines are not set in stone but are merely a way of optimizing this type of training. Some people are able to recover so quickly that they could train push and pull on two consecutive days. But this is unnecessary. If you’re training using PPL, you should do it as effectively as possible.

Who benefits most from this split?

PPL is probably one of the most effective splits for beginners as it allows for optimal recovery and incorporates compound movements. Compound movements are exercises that target many muscle groups at the same time (such as the bench press, squat, dead lift, etc.).

What about building muscle?

Muscle is built through the application of one simple concept—progressive tension overload. Forget what anyone else has told you. Forget about the drop sets, burn-out sets, and all that nonsense. That stuff looks fancy, but it is not supported by science.

So, what is progressive tension overload? Essentially, it’s the idea that muscle is built by forcing it to adapt to a tension that it hasn’t previously experienced.

In other words, in order to build muscle, you must try your absolute best to periodically lift heavier and heavier weights. Then, as long as you are lifting more and more weight each week, you are succeeding in your goal of building muscle.

Plus, the best way to get stronger is to focus on compound movements, making the PPL split great for both developing strength and building muscle.

This variation of the 3-day split builds on PPL by splitting the muscles further.

“Push” is divided into chest, shoulders, and triceps, and “Pull” into back and biceps. Triceps are trained on chest day, biceps on back day, and shoulders on leg day.

There are plenty of good ways to group chest, triceps, back, biceps, legs, and shoulders. However, the version I present is the one I’ve observed to be most efficient. Pairing legs with shoulders is unusual but I’ve had a lot of success with it.

So, who will benefit from this split?

Anyone who is serious about building muscle. In my opinion, this is the optimal 3-day split for building the most amount of muscle in the least amount of time. Here’s what it looks like.

If you are a beginner, you might want to start with PPL , ULU, or ULF (discussed below), then transition into this split when your body’s ability to recover improves.

The ULU split is similar to PPL. “Pull” and “Push” are combined into “Upper Body” and trained twice a week. As such, you should hit upper body with a little less intensity (compared to PPL).

Are there any benefits of this split over PPL? Not really. Some may find that training “push” and “pull” muscles once a week (each) yields better results than training “upper” twice a week with less volume. Others may find the opposite.

At the very least, you have something to switch to if you stop seeing results with PPL.  It’s always a good idea to periodically (every two to three months) switch up your routines in order to “shock” your body. Sounds like bro science, but I find that doing so prevents plateaus.

Here is the split:

The ULF split is just like the ULU split, but with a slight twist. Instead of training upper body twice a week, we train it once and do a full body workout on the third day.

The difficulty level is one point higher than PPL and ULU as this split requires that your entire body has recovered by the last workout. So, it’s a good idea to schedule “upper” and “lower” as close together as possible and “full body” as far from them as possible:

Or you can do U/R/L/R/F/R/R, but I prefer the rotation above.

This is the most difficult workout in this article, yet it seems to be a very popular for beginners. However, three full body workouts a week is hard to pull off. Why?

First, its takes a long time to train every muscle group. I need 60 mins just to train the legs. I may be getting old, but I don’t see how someone can train the whole body in less than three hours.

With that being said, it’s the most effective workout on this list (if you can pull it off). 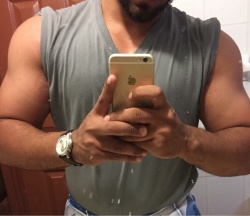 Adam
Adam is the founder and main contributor for Olympic Muscle. He is a full time pre-medical student majoring in computer science and chemistry.